The success of any sales company ultimately relies on its graduates, and in this regard Goresbridge is second to none. In the past four decades, graduates have competed at the highest level and boast some enviable statistics.

Having celebrated its half century in 2018, the family run Goresbridge Horse Sales in Co Kilkenny continues to hold its place as Europe’s largest and most successful sport and leisure horse auction. Ideally situated in the heart of Ireland’s horse breeding country, the purpose-built complex stages seven performance sales throughout the year, among which is the flagship six-day fixture in September. This must attend sale usually offers in excess of a thousand horses from the age of three and is the largest of its genre in Europe.

Further dates include the prestigious Go For Gold sale of select event horses in November, the new one-day select sale of show jumpers and event horses in October as well as sales of sport horse foals and broodmares.

Goresbridge boasts a long history of being the wellspring of many international household names in eventing, showjumping & showing, with many stalwarts of the sports having being sourced at Goresbridge such as Dougie Douglas, who was sold at the Goresbridge Supreme sale of Show Jumpers (2015) for a record breaking €1.4 million. A regular in classes up to 1.60m, his many top placings include the runner up placing in the World Cup qualifier at Washington (CSIO4*) for Katie Dinan. Gold and individual bronze medal-winning McKinlaigh (USA), Buck Davidsons USEF National Champion, Ballynoe Castle RM and also his mount, Copper Beach, to name a very select few.

The leader in its field, Goresbridge Graduates have represented their countries at every major show jumping and eventing championships, accounting for 44% of the Irish bred horses at the London Olympic Games and 28% of the equestrian medalists in the Olympic Games Beijing. In 2016, two Goresbridge graduates filled top ten positions in the individual eventing competition at the Rio Olympic Games.

At the CSIO in Odense in 2014, the winning British Nations Cup squad was filled entirely by Goresbridge graduates (Dougie Douglas, A Touch Imperious, Santa Cruise and Touchable).

The sales complex is situated in the heart of Ireland’s premier horse breeding country, where seven performance sales are staged each year. Among these is the flagship ten-day sale in early September, which offers around 1500 horses from the age of three and is probably the largest fixture of its genre in Europe.

2017 proved yet another outstanding year for Goresbridge graduates, and among those making headlines were:

Also posting some outstanding results were the show jumpers Cybel, Dekato and numerous others.

While the Donohoe family at Goresbridge are justifiably proud of the achievements of these competition horses, they are equally rewarded by success stories of the thousands of horses and ponies who give pleasure to those who ride for fun.

Sourced by both private and commercial buyers, these leisure horses, ponies and hunters sell in significant numbers throughout the year and attract customers from all corners of the world.

The majority of horses are sold at the sale complex at Goresbridge, where there are seven Sport Horse Performance sales throughout the year. At these sales, every horse can be seen performing prior to sale, either in the purpose built indoor arena or on one of the two all-weather surfaces. Each horse is sold with a veterinary certificate from one of a panel of specialist equine veterinary surgeons.

The reputation of Goresbridge graduates is renowned, and the team at Goresbridge is committed to providing a service in line with that reputation. So, in conclusion, whatever you require, the Donohoe family will assure you of a warm welcome, a professional service, and will be happy to assist you in every way possible.

“I first attended Goresbridge as a boy with my father – and now I bring my son. During this time Goresbridge has consistently provided us with the quality of horse that we, and our customers require.” Jim Derwin, leading dealer and producer.

“We get a really big buzz from going to Goresbridge. We have bought some lovely horses – you can never tell what you might find.” David Tatlow and Lorraine Homer. Leading Show Horse producers UK.

“Goresbridge has been a very lucky sale for us and is the best place we know to buy the quality of horse we look for – and at value.” Graham and Holly Smith. Producers of former Goresbridge graduates Dougie Douglas and the recent HOYS Puissance victor Quality Old Joker. .

“Goresbridge in September is a important venue for me when it comes to sourcing potentially top class three-year-olds.” Oliver Townend. (British event team rider).

“There is no choice like a great choice when it comes to Goresbridge.” Donal Barnwell. Leading event horse producer. UK

“Goresbridge is a real eye opener – so many horses to choose from and to suit all personal opinions.”   Rodney Powell. International Event Rider.

“Goresbridge is always exciting, and like Pandora’s box you never know what will appear.” Clare Ryan. International Agent.

“Goresbridge has been a lucky venue for us, and usually we go home with a smile on our faces.” Anne and Louise Lyons and Kelly Ward. Leading show and event horse producers.

THE GO FOR GOLD SALE

The Goresbridge Go For Gold Sale of pre-selected event horses has been the success story of recent years. Now heading into its eighth renewal, the sale has truly achieved its aim of bringing together Ireland’s best young event horses to one venue for one sale.

Staged in November at Barnadown and the Amber Springs Hotel in Co Wexford, the sale offers around 50 proven and potential event horses from the age of three, all of whom have been selected by a highly experienced panel of producers and international riders.

Of course, the reputation of any sale relies of the success of its graduates, and in this regard the Go For Gold sale is second to none.

Although it is still in its relative infancy, graduates are making progress through the grades, with several already achieving international honours.

PROMINENT GO FOR GOLD WINNERS IN 2017

Other notable winners include:

Goresbridge raised the bar yet again, when the second running of the Supreme Sales of show jumpers produced some outstanding returns. The sale of Nickoletta K at €460,000 was the highlight of the evening, while the Lanaken gold medallist Killossery Kaiden changed hands for €270,000. Staged at Barnadown the evening before the Go For Gold sale, the sale renewal delivered an average of €84,781. 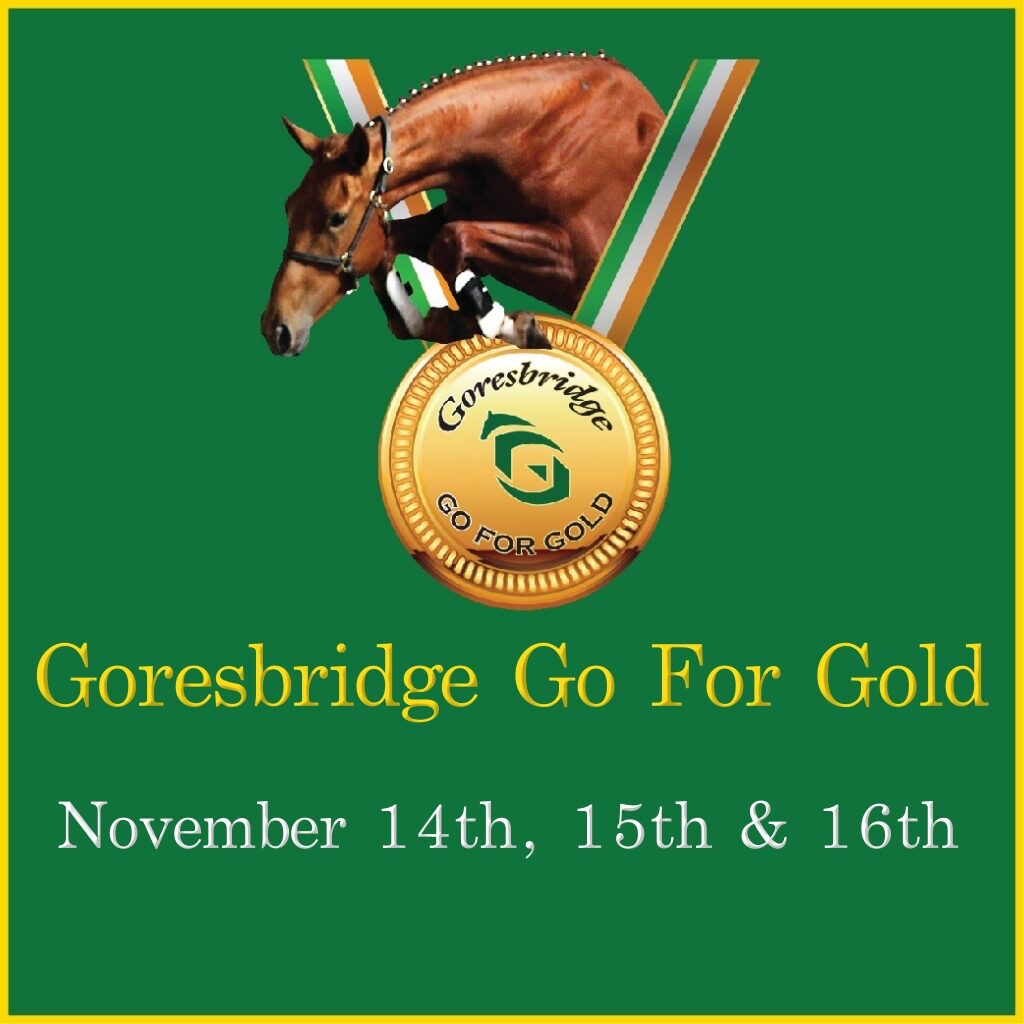 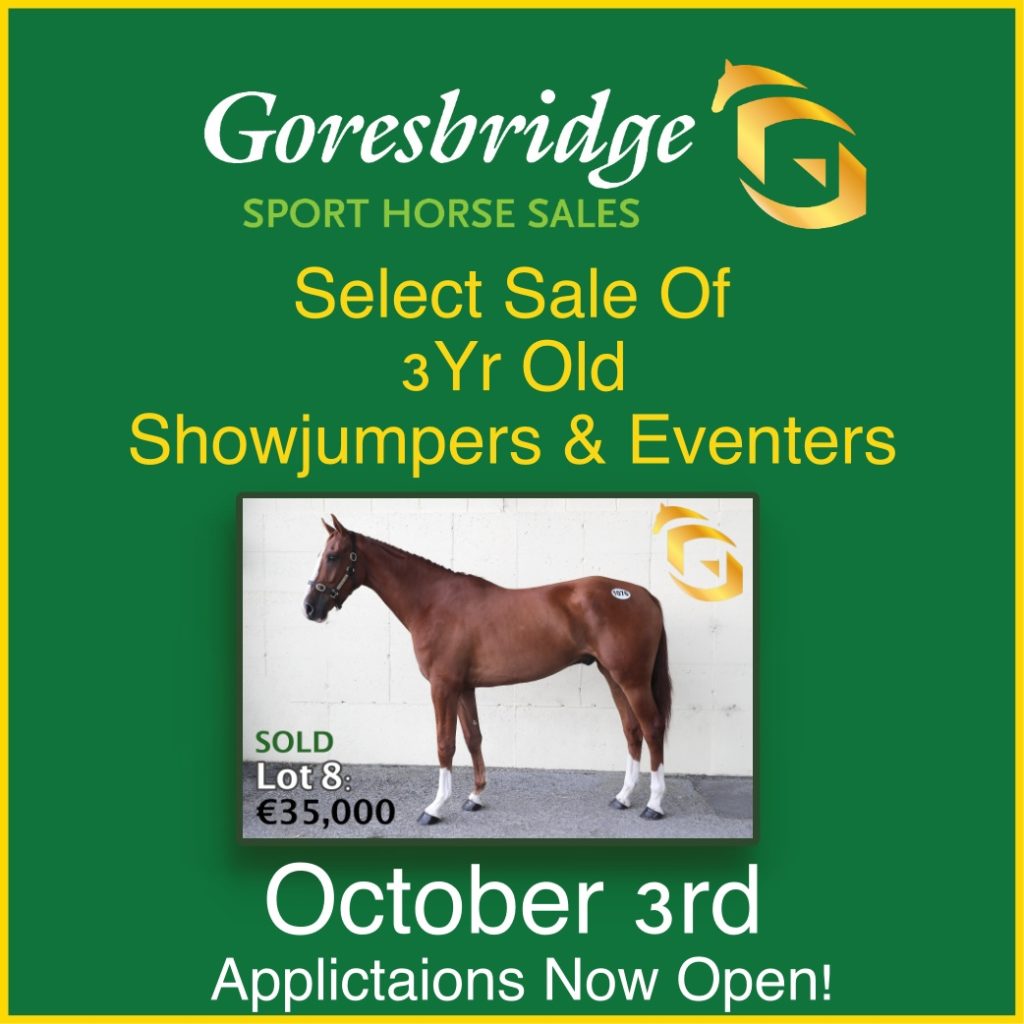 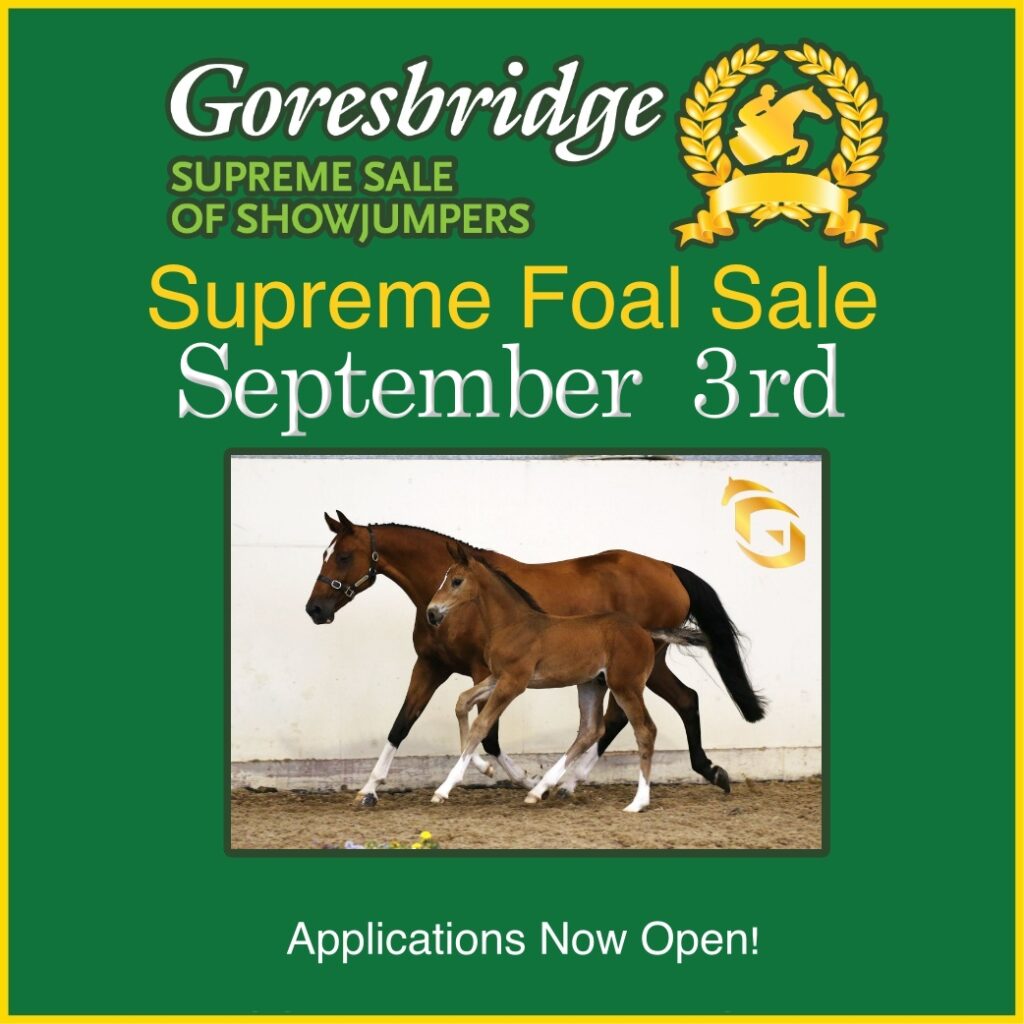